In August last year, I visited New York for the first time. The first of many times, I very much hope. My friend and I stayed in a wonderful Airbnb apartment with a friendly couple and an adorable dog. The apartment was in South Williamsburg, and I’m so glad we chose somewhere a bit different rather than going for the centre of Brooklyn or Manhattan. Naturally, being tourists, we spent all our time in those areas anyway, so it was great to see a bit of New York that we wouldn’t have seen otherwise. It really is an amazing city. I ate so much pizza and so many bagels.

It was August, and nothing could have prepared me for how hot it was. Hotter than the rainforest – and I would know, I spent two months living in one. I’d worn a very loose dress (#5 on that list) with a strappy back for comfort on the plane, but after getting out of the subway and realising I was surrounded by Hasidic Jewish people, I almost cooked myself keeping my hoodie on as I attempted to find the apartment. At least I didn’t offend anyone!

Before I left for NYC, a combination of job interviews an a terrible cold resulted in me doing some extremely last minute holiday prep. As I wasn’t going to be staying in hotels, I needed shower gel. This compact and beautiful Korres Bergamot Pear Shower Gel bottle caught my eye on ShowerHacks.com. Although it’s 250ml like most shower gels, it just seems to take up less space than others. Maybe it’s my imagination, but a basic bottle of Radox definitely looks bigger, yet holds the same amount. Perhaps Korres are cutting down on packaging? They certainly seem like the kind of company who would – they have a lovely ethos.

I didn’t open the shower gel until several days later when, jetlagged, boiling hot and possibly a bit smelly, I undressed in our host’s walk-in shower. Tiled in dark red, with a waterfall shower head attached to the high ceiling, it was cool, quiet and calm in that shower. The water fell heavily and I set it to cold. I flipped the lid and poured some gel onto my travel sponge, and as I massaged the gel over my hot skin I absolutely couldn’t believe how gorgeous the scent was.

The Bergamot Pear fragrance is sweet and fruity from the pear, but there’s a gorgeous freshness and bit of sharpness to lift it up. As I stood there in the shower the scent restored me completely. It woke my mind up and washed away all the drowsiness in my muscles. Although it’s sweet, the fragrance is incredibly clean, so you get all the benefit of a super freshening shower gel without the artificial tang.

As the boiling hot New York summer progressed, we spent sleepless nights under thin sheets, and long days exploring the city. Naturally, I showered a lot – waking myself up and cooling myself down in that beautiful bathroom, and whenever I’ve used the shower gel at home since, it reminds me of the wonderful time I had.

With aloe vera gel and wheat proteins, the shower gel isn’t just good for the senses, it’s great for the skin too. The cooling aloe is probably why it felt so good on my skin after long days out, and the wheat has kept my skin soft and supple all through winter too – I’ve been using it almost constantly since the summer.

I saw the Body Milk in Liberty’s a while ago, but because I have so many body oils, creams and lotions, I stopped myself from indulging. I really wanted to though. That scent is hard to resist, so after I got my new job, I decided to treat myself. Well, I’m glad I did; This is the ultimate summer body lotion. The milk sinks into the skin immediately, leaving it incredibly soft, and beautifully scented. There’s aloe in there again to cool, along with shea butter and jojoba to soften. I’m completely obsessed with it – I usually to forget to moisturise after a shower because I’m really not a morning person, but since buying this I’ve remembered to do it every single day. 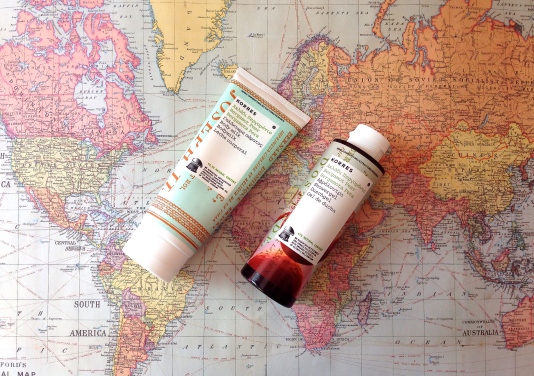 I really can’t describe how gorgeous these products are. I know that’s technically the whole point of blogging about products, but to be honest I just really want you to go to your nearest retailer and have a sniff, because I know you’ll buy it. If you’re looking for some fruity, clean and fresh smelling body care for the summer months, these are your guys. At £10 for the Body Milk and £8 for the Shower Gel, you can’t really argue with the price either.

This site uses Akismet to reduce spam. Learn how your comment data is processed.